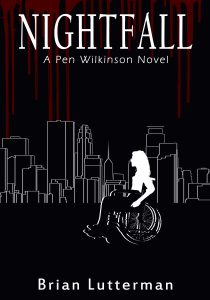 A secret plan to ignite racial violence is underway.

Only one woman can stop it.

Paraplegic attorney Pen Wilkinson, fighting through horrific flashbacks from a previous case, returns to Minnesota to investigate the murder of a candidate for governor. Is the murder a crime of passion, a political assassination, or part of a larger scheme? Fighting opposition from both police and the minority community, Pen presses ahead, unraveling the explosive secret of the thirty-year-old police shooting of a civil rights leader. As tensions mount, Pen’s search unearths a horrifying plot to engulf the state in racial violence for political gain. Stymied by police caution and political gridlock, Pen races to expose the plan before the conspirators can silence their latest target: Pen Wilkinson.

“It’s a great read, with plenty of scary moments that will push you to race through it. Don’t count on getting any sleep if you read it at night.”
–Sandra Penny, Sweet Mystery Books