Possibly the two unluckiest people in the known universe were the characters played by Robert Wagner and Stefanie Powers in a 1980’s television show called Hart to Hart. This insufferably cute couple, an industrialist and his wife, had the misfortune of stumbling onto a murder, extortion attempt, kidnapping, or other […]

IF YOU ATTEND ONLY ONE BOOK EVENT THIS YEAR . . .

You need to get out more often!

And there’s no better place to start than at Bookstube MN. Join me on Thursday night, April 22nd for one of my very favorite book events. I’ll be the featured author at Bookstube, which always has an enthusiastic and well-informed audience.  It’ll be virtual but I guarantee it will be fun. Click here for the link and more details – you won’t want to miss it.

I’m pleased to announce that a short story I’ve written has been selected for publication in a new anthology entitled Minnesota Not So Nice: 18 Tales of Bad Behavior, which has been published by the Twin Cities chapter of the Sisters in Crime organization. My story, entitled The A to Z Solution, is not a Pen Wilkinson story, but I think you’ll find it just as suspenseful.  Minnesota readers should find it particularly enjoyable, but my fans from across the country will get a kick out of crime, Minnesota-style. 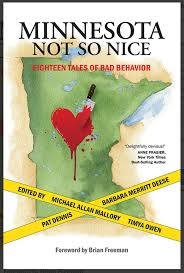