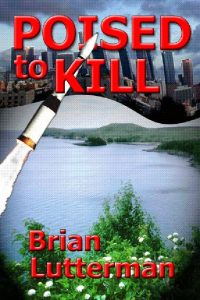 How Far Would You Go to Save Your Daughter?

Extortionists present corporate executive Hal Dwyer with a nightmarish dilemma: Turn over top secret anti-missile software from his defense contractor employer, or forfeit the life of his twelve-year-old daughter. To thwart the extortionists, Dwyer sets out on a quest for answers that takes him from the boardrooms of southern California to the wilds of northern Minnesota. As he seeks to unravel the plot that threatens to destroy his family and his country, Dwyer confronts a ruthless foreign tycoon, a treacherous corporate CEO, and a new, deadlier breed of terrorists, who are determined to turn America’s defenses and freedoms against itself.

“Author Brian Lutterman has proven himself to be a master storyteller in this masterfully woven tale of tycoons and terrorists. Poised To Kill is highly recommended reading, especially for enthusiasts of contemporary action/adventure thrillers.”

“Lutterman keeps his readers on the edge of their chairs until the last page. The twists, chases, and shootings by professional terrorists keep occurring with increasing tension. Written in the first person, Lutterman draws his readers into the thriller. Lutterman is the author of BOUND TO DIE, another taut, top quality thriller. This is a suspenseful, must read book.”

—Marion Cason, I Love a Mystery

“…a good, enjoyable read, with satisfying links to today’s society. Lutterman should garner wide audiences for this story, and for those to come.”

“Lawyer and author Brian P. Lutterman’s latest novel, Poised to Kill is an action packed suspense thriller that’s just simply enjoyable. Lutterman who packed a punch with his debut novel Bound to Die, proves that he is not just a flash in the pan or a one- book wonder with Poised to Kill…Highly recommended.”

“…tightly plotted and has a fascinating take on an interesting scenario.”

“Layers of betrayal is the name of the game in Poised To Kill. The plot ventures cross country and back around many twists and turns to uncover who might be behind the plan to cripple a nation, a major company, and ruin one man’s life. Poised To Kill is very intriguing and full of unlikely suspects. It will keep you turning the pages and digging to find out which betrayal is the root or are they all just pieces of one big plan.”

“The tension starts in the second paragraph and doesn’t loosen its grip on the reader until the very end. Literally, I could not put the book down. This was my first experience with Brian Lutterman; now I’m very anxious to read his book, Bound to Die!”

JOIN ME IN JULY!

A Minnesota farm kid. A former corporate attorney.  And, in recent years, an author. Lutterman coined the term “corporate thriller” to describe his series of suspense-filled novels featuring Pen Wilkinson, a sassy, whip-smart, paraplegic attorney, described by the St. Paul Pioneer Press as “. . . one of the most intriguing new characters on the Minnesota crime scene.” The series began with Downfall, praised by Mystery Gazette as ” . . . an exhilarating, action-packed financial thriller.”  The series’ fourth book, Nightfall, was named 2019 runner-up for Minnesota’s best adult novel in the Minnesota Library Association’s annual competition. Lutterman’s first book, Bound to Die, was a Minnesota Book Award finalist. Brian lives with his family in the Twin Cities.